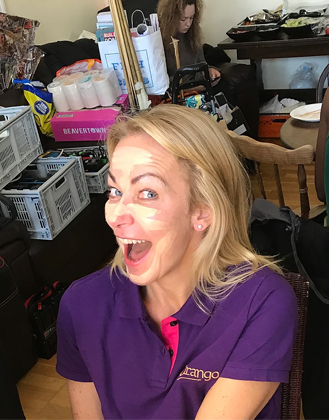 Producer and Actress of the new 2020 crime, drama film BREAK, Terri Dwyer, jumped on the phone to @londonbeautifullife to give us more of an insight of all the behind the scenes gossip we won’t get to see in the film BREAK, her co-stars, Hollyoaks and what she has coming up for 2020/2021.

Known for being on Hollyoaks and Presenting on Loose Women and 60 Minute Make Over, @londonbeautifullife is excited to hear from Terri with over 20 years of experience in the media, television and film industry.

Check out the transcript below.

Terri Dwyer – “BREAK is slightly autobiographical from the writer, director Michael Elkin and it’s about a kid who is from second-third generation who grows up on a really down trodden council estate. His father is in prison, he has a very working class mum, which is me and he is dealing drugs, his best friend gets stabbed, but he is a really, really talented snooker player. BREAK is about are you able to break free from those negative influences you are born into”.

Terri Dwyer – “Can you be strong enough to BREAK away from that? It’s a rags to riches feel good story”.

@londonbeautifullife – “I know you produced as well as acted in the role what was the contrast between the two and tell me about your role?”.

Terri Dwyer – “The way it came about was Michael Elkin approached me on twitter and said I have written this part for you. I read it and I couldn’t put it down, so I rang him straight away and said ‘I have to play Cathy’, Spencer Pryde played by the wonderful Sam Gittins, I play his mum”.

Terri Dwyer – “When I started to talk to Michael about this, Michael and I really got on well and he said would you want to be a producer. At that time I had produced a short film for Jeremy Edwards who was my husband in Hollyoaks, I had also produced a play which went on tour, so I have had a little bit of producing experience but not a feature. I took it as far as I could then I brought on a very, very dear friend of mine Dean Fisher. Dean has been a producer for 20 years and I have known him for 20 years. I always thought he would give me a job and I ended up giving him a job, but I also knew Dean would teach me to be a producer. I really enjoy it that I am partly responsible for what you will see on screen. On the days I was acting, I wasn’t a producer and I took my producer hat off”.

@londobeautifullife – “What is your favourite moment working on BREAK?”

Terri Dwyer – “I loved being on set, on set is where I really feel at home. (I have been on set) on and off for the last 20 years that’s where it has been my home. A wild moment was when Rutger Hauer was on set because you forget how amazingly accomplished he was, he was a real Hollywood legend. Also when we were on set for the first time, that was also one of my proudest moment. I’ve grown as an actress, producer and a human being. BREAK will always being my proudest working achievement”.

@londonbeautifullife – “Terri, you were on Hollyoaks so what was it like working with Charlie Wernham who was also on Hollyoaks. Did you swap Hollyoaks stories?”

Terri Dwyer – “Our paths never actually crossed on Hollyoaks, but when you meet someone from Hollyoaks there is this automatic connection, because you have that shared history. Charlie is a huge talent and I loved watching him work, he is a really gifted actor. I’m only sorry I didn’t get to do any scenes with him (on BREAK) really. I would love to work with Charlie again, on and off set. He is a real proper London boy, you can’t not love Charlie Wernham, he’s a proper geezer and Sam Gittins is the same, I think they made a really great friendship working on BREAK, both lovely, super talented boys”.

@londonbeautifullife – “You filmed in Sheffield, London and Beijing. Why those locations?”

Terri Dwyer – “Sheffield is the home of snooker, Sheffield is also so beautiful, cultural and pretty that I had ever imagined. I am really excited to go back with the finished film. We also filmed in London and Beijing. I held the fort down in the UK as the other producer went to Beijing with the cast and crew.

@londonbeautifullife – “Where were your favourite places to film in London?”

Terri Dwyer – “My second favourite place in London, is the Cuckoo Club. We doubled up on filming, a bar scene supposedly shot in Beijing we actually filmed in the Cuckoo Club, it’s beautiful and absolutely stunning”.

@londonbeautifullife – “What was it like working with Michael Elkin?”

Terri Dwyer – “He is a really gifted writer and director, we work really well together. Michael will have a wonderful career and I hope BREAK is the swing board and takes him where he needs to go. He is a gifted writer and a joy to be around on set. He is an actor as well so he knows what it is like to be on the other end with things, he communicates really well with actors”.

@londonbeautifullife – “I see on IMDb that 2020 and 2021 is looking busy for you. Can you tell me a bit more of what you have coming up next?”

Terri Dwyer – “I have a project called Endangered World, one of a trilogy of films with investors at the moment. And I have another one in development which is kind of like a Sci-Fi, Horror type of project. I still have voice over agents and acting agents. I also have a play in development which will hopefully be in London”.

Terri in The Daily Mirror 5 October 2015