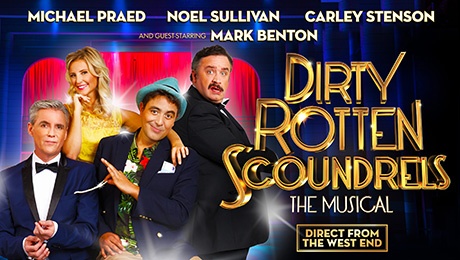 My husband and I had a rare night out together at the press night of Dirty Rotten Scoundrels recently. The show is a 2004 comedy musical, with music and lyrics by David Yazbek and a book by Jeffrey Lane, it is based on the 1988 film of the same name. The musical premiered on Broadway in 2005 and ran for 626 performances despite mixed reviews.

I use to walk past the West End production when I was playing at the Charring Cross theatre recently. It opened in 2014 to generally warm reviews.

I have to confess I didn’t see this production, but as I was watching the tour, I couldn’t help but feel that nobody could do Lawrence better than Robert Lindsey. Michael Praed did a wonderful job, but I do think walking pass the Savoy and seeing a huge photo of Robert Lindsey every night has probably made some kind of lasting impression on my brain!

For me, the real starts of the show are Noel Sullivan and Carley Stenson. Popstars who? The fact that a tidy sum of people didn’t even know it was the same Noel Sullivan from Popstarts the Rivals, indicates to you how he is able to convincingly morph into his copious characters. The ease in which Noel moved from character to character is a real testament of how far he’s come. Having done two very different characters on stage recently, I can tell you it’s not easy!

And of course, whilst I’m biased about ex Hollyoaks star Carly, she was truly wonderful and the on stage chemistry between Noel and Carly was palpable. Laughing, crying, singing and dancing, and that was all before a glass of wine to calm me in the interval!

Do try and catch this show if the tour comes near you, it’s a cracking night out. 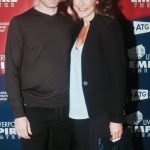