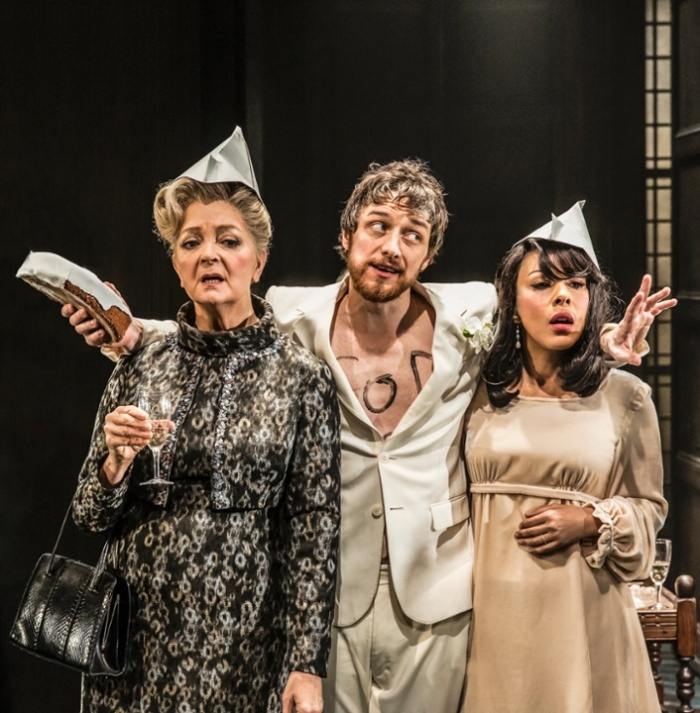 Wow doesn’t seem to quite cover it! Never before have I walked out of a play speechless. I was so mesmerised by the outstanding performance of James McAvoy that I’ve not stopped thinking about the play since!

Playing an earl with a messiah complex, James McAvoy heads up a cast ( who all give a stellar performance ) including Ron Cook, Serena Evans and Kathryn Drysdale.

Peter Barnes’s wickedly dark, surreal 1965 comedy is the latest classic to get transformed at Trafalgar Studios London.
Ok, so the play is a bit bonkers at times, and I did giggle more than once thinking, ‘is this for real? Is McAvoy really riding around on a unicycle in just his underpants?!’ But McAvoy unashamedly committees to every second of the play and although he’s well into the run, I found myself feeling like it was his first performance. To be able to maintain that kind of energetic, charismatic, psychotic, physical performance 8 shows a week is a credit to him.

This is a must see show and without doubt McAvoys performance is the must see performance of the year. I felt like I was watching ‘one of the greats’. Not because I’m seduced by his work in Hollywood, but because he’s one of the best actors of his generation. The Ruling Class serves as another reminder to that.

All photographs by Johan Persson