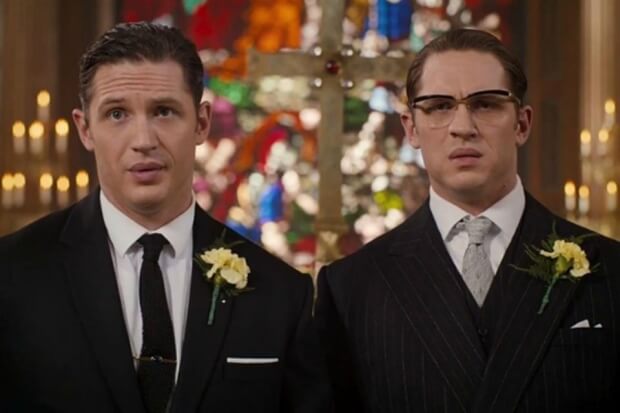 I’ve been wanting to see this film since I’d heard about it. I’ve seen all the films about the Kray’s and like most of us, still find them fascinating. I’m also a huge Tom Hardy fan. I really believe he’ll go down as one of the great actors of his generation.

From Academy Award winner Brian Helgeland comes the true story of the rise and fall of London’s most notorious gangsters, Reggie and Ron Kray.

Although there are flaws in the film, it is without doubt a must see film due to the breathtaking performance by Tom Hardy. He is such a consistent actor, you know he commits to every performance and this makes compelling viewing. If you ever doubted his ability before this film, I’m certain you won’t after. This is a showcase for Tom Hardy and one worthy of an Oscar. Although I do think the competition is stiff this year.

Hardy’s ability to differentiate the twins and the camera tricks employed to put them together in scenes are what’s impressive about the film. Caroline Harris’ period costumes are also a memorable thing about LEGEND.

LEGEND is a classic crime thriller taking us into the secret history of the 1960s and the extraordinary events that secured the infamy of the Kray Twins.

Try and catch it before it comes off the cinema, it’s impressive on the big screen!

Terri bravely talks about skin cancer on This Morning... Watch it on catchup.

Break: ‘Rocky with a snooker cue’

Break is 'Rocky with a snooker cue'. A rags to riches feel good story. It’s…

Cabin 28 is on pre-order at Walmart